By now you’ve probably heard of Soylent, a pre-prepared powder that is mixed with a small amount of oil and some water to create a “meal” that is supposed to be similar to other meal replacement drinks (think Slim-Fast, etc), but nutritionally complete. I’ve been very interested in this from the get-go, as most of my go-to foods for breakfast and lunch are easily prepped, but are probably lacking in the nutrition department. In addition, I feel that a lot of these don’t keep me satiated as well as they could, which sometimes leads to me eating more than I’d like.

Currently , the lowest price you can pay for Soylent is $255 a month if you buy the maximum of 1 months (28 days) worth or a recurring basis. This factors out to about $9.11 a day, or about $3.04 a meal if you cut the serving into 3. This isn’t a bad deal; I currently pay about $200-$250 for food for myself a month (based on paying about $400-$500 a month for myself and my fiancée). However, even with Soylent, I’d still like to keep regular food around the house, as I’m afraid that I would get bored with just one type of food, so this amount may be too much for people like me. In addition, I’m sure most of you are like me and would like to try Soylent before investing several hundred dollars into it. If you want to just try out a small sample to test the taste, consistency and satiety, you would pay $85 for a weeks worth, which comes out to $12.14 a day, or $4.05 a meal, which is roughly 33% more expensive than with the recurring monthly package.

Thankfully though, the creators behind Soylent are very open about what goes into their product (possibly due to some of the criticisms of their product with regard to how nutrition works), and are very supportive of DIY Soylent. Using the tools they provide, you can create a recipe and add different ingredients together to try to make a nutritionally complete version of Soylent that can be tailored to your specific needs, such as begin vegan, low-carb, high-protein, low-cost, etc.

I thought it would be fun to try to create a version of Soylent for myself using this tool. I decided that I wanted my recipe to try to meet a few criteria:

With these in mind, I started looking at some of the recipes that already existed. I started off looking at various recipes and found that most of them consist of roughly four basic ingredients: flour, some form of protein powder, oil and a vitamin. These ingredients will usually form up the bulk of your macro-nutrients (carbs from the flour, protein from the protein powder, fats from the oil and basic vitamins/minerals from the vitamin). From there, the recipes deviate, adding in additional vitamin/mineral supplements or other ingredients for taste. The basic 4 ingredients are all relatively inexpensive, usually save for the flour, as most recipes prefer using specialized flour like oat or flaxseed instead of regular wheat flour.

Using this knowledge, I looked at some of the more popular recipes, namely the Hacker School recipe. I created a mock-up of the recipe to see how the nutrition played out, which seemed to fall very short of my goals. I’m not sure if it was because I switched out some ingredients with mostly equivalent items in attempt to get the price down, or if the recipe is just not good to start with, but I wasn’t able to get a decent price while maintaining nutritional value. Looking through some of the other recipes on the site, I saw that that it wasn’t uncommon to undershoot or overshoot most values.

About that time, I read another article on Bachelor Chow and People Chow. These both have similar ingredients, but both way overshot the vitamins/minerals. I set about trying to recreate the recipe to hopefully slightly undershoot the nutrition (remember, I’d like to eat regular food for dinner as well), or at least avoid some of the vast 600%+ overshoots. I replaced the whey protein with a soy protein I found in another recipe, and the protein powder with the one I already had. I replaced the choline bitartrate with a cheaper pill alternative, and the soybean oil with a local generic. I removed the potassium citrate completely after reading the safety section of the Hacker School blog recipe, figuring that I would rather undershoot and have a banana if needed than overshoot. I removed the magnesium because it was overshooting by 200%, and instead put in a generic multi-vitamin (Centrum is listed, I used the generic store-brand of it instead). For the masa, I bought the same type, but at a local store for 1/4 of the price, and the salt I already had a big container of.

Here’s the recipe on DIY Soylent. The full cost of what I would have paid was slightly less than what I estimated in my recipe, so it should be pretty accurate. Based on the  data there, this recipe costs $1.96 a day, or about  $0.66 a meal. Not bad.

To make the mix, I combined a days worth of the masa, salt, and both proteins into a large measuring cup. I took a Mortar and Pestle and ground up the multivitamin pill and choline bitartrate pill and ran them through a sifter to remove the non-dissolvable coating. Finally, I took 1/3 of the mix, put it in a blender bottle, added 1/3 of the oil (about 17g), and filled the rest of the bottle with water, then shook it up. 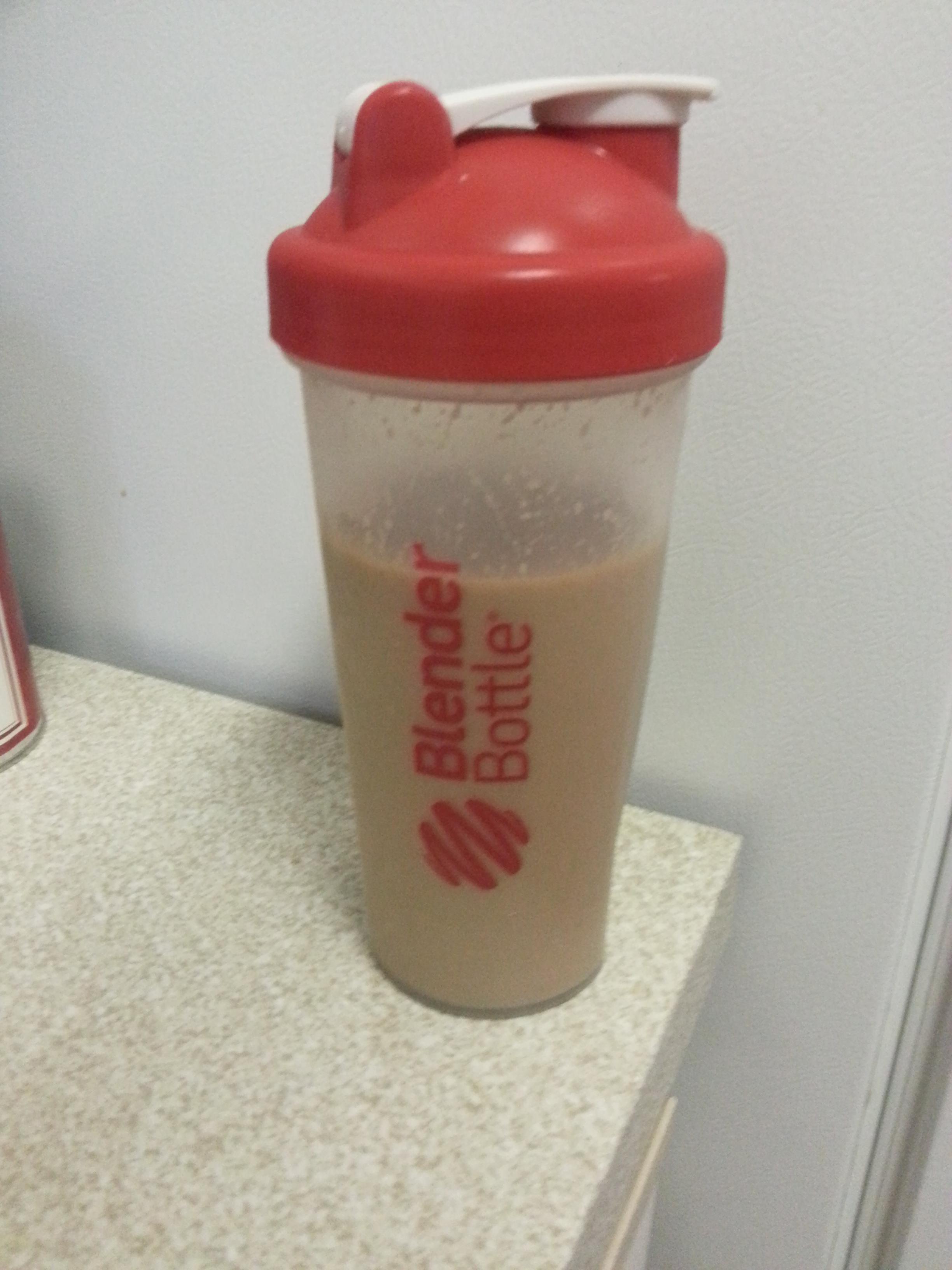 The result is about the only thing that could be expected from inexpensive Soylent: lackluster. Imagine dog food for people, ground up and put into water, with a tortilla after taste. I’ve had way worse than this before, so I’m not complaining about the taste much. Even better, the recipe is slightly calorie deficient, I’m sure you could add in some brown sugar for simple syrup to help improve the taste.

The biggest obstacle with the Soylent is the texture. See, masa doesn’t really mix well with water, so right off the blender bottle mixing it has a super gritty texture. It’s not unpalatable, but you could practically chew it if you felt like it. I think this could be reduced somewhat by drinking it through a straw to reduce how much you take in one sip. blending the Soylent also seemed to reduce the grittiness, but not by a whole lot. I read a lot about people allowing the Soylent to soak in the fridge overnight after mixing. I tried this and it is vastly improved the next day, so I would recommend that, but it is still noticeable.

I think the biggest improvement that could be made it to cut the masa with a different type of flour, maybe trying to do a 50-50 mix and see how that works. I’ve seen a lot of recipes use rice or oat flour, both of which are relatively inexpensive. You can also make both of these cheaper by buying whole rice/oats, soaking them and then blending them finely. I even saw one person mention that he essentially makes oatmeal with whole oats, blends it then uses that in the soylent, which makes it more smooth. It may also be worth splitting the full-day mixture into fourths instead of thirds and using that, which would allow a higher ratio of water to mix that could improve the texture. This would also be beneficial to me, as I want Soylent for 2 meals a day, it would allow me to make a new batch every other day instead of every day and a half.

The taste could probably also use some work, again maybe by adding a bit of sweetness to it. I think brown sugar or simple syrup would work relatively well, or stevia if you wanted a low/no calorie option. Doubly so if the flour is cut with another type, as it will reduce the tortilla flavor. I’ll have to experiment with this.

All in all, I’m impressed by how something so cheap tastes decent and is edible. I’d like to try to improve the recipe some while still keeping the cost down, so any feedback is welcome. Feel free to comment or make variations on the recipe. I think I will also start posting some periodic updates on how it is staying on this for a while, how well it satiates, etc.